Woah, what a year!

If you had of said to any of us at the start of 2016 that, by the end of the year we would have a commercially available beer on tap in some of our favourite Perth/Fremantle bars and pubs we’d have laughed at you! But here we are.

To say 2016 has been a learning curve for us is an understatement. When we all made the decision to start South Fremantle Brewing we had two goals. Learn something new, and see someone we didn’t know drink our beer in one of our favourite pubs and like it enough to get another. That was it.

In terms of learning something new that was going to be easy, as apart from our day jobs this was all completely new. For example, no one had made a website before, no one had much of a care with social media, no one had ever worked in sales before so walking into a bar and attempting to sell them our product was all a new experience. With lots of questions and reading and discussions as well as mistakes we’ve all learned something new, that we didn’t know before.

By far the most gratifying part of this experience has been the feedback we have received from not only the public, but bar managers, owners and staff as well as some industry heavy weights, brewers we all look up too and the general public. That first time sitting in a bar watching someone go back for a second, third and fourth pint of Session IPA was a pretty good feeling.

Some highlights for 2016 have been;

That’s just a few of the things we can think of, off the tops of our heads.

So, what’s in store for 2017? More beers. Working on and expanding our core range. More events in the pipeline. Some interesting collaborations. More venues. More learning and more fun no doubt.

Despite the weather on the day, the SFB launch at Percy Flint was a huge success! We were all completely humbled by the turn-out and all the kind words and encouragement meant the world to us, so thank you all so much!

Also, a big thank you to those people we managed to get signatures from regarding our wholesaler’s licence application. We received nearly 200 signatures on the day! Massive effort! If you couldn’t make the day or we missed you, we have created an online petition for anyone who would wish to sign it and help with our application.

A couple of stats from the day that we think are worth sharing that have blown us away, but highlights the level of support we have received are;

Also a big thank you to the team at Percy Flint as well as Wes, Jake, Vida and Micah for keeping the party going in the rain throughout the day in the court yard.

Post launch has been very busy for South Fremantle Brewing, Mainly on the business side of things. New venues, merchandise, more beer, future planning, a couple of parties and all those background things that we’re learning about as we move forward with this adventure.

We will have a couple of announcements about some events we will be a part of soon, so keep an eye out.

How did we get here?

As we head towards our launch at Percy Flint in a couple of days we have a few people we would like to acknowledge for helping us get to this daunting position.

Our inaugural beer release, our SESSION IPA is a re-worked version of a beer brewed by the formally mentioned Sunset Castle Brewing Co. This original beer we decided to enter into our very first competition at the Dutch Trading Co in Victoria Park for a bit of feedback, and to see how we were travelling. Turns out we did all right and received the ultimate ego boost,

as we actually won the event! That was a good feeling we wanted to have again so to prove it wasn’t a fluke a few weeks later this same beer won its second time at a competition in Margaret River. More on these awards in a future post.

After receiving these two awards a little idea popped in our heads. “Hey maybe we could try and get this beer on tap somewhere”, suddenly things were a little more serious. This idea was first given its legs after a few conversations with the guys at the Dutch Trading co, so thank you so much for putting the idea in our heads and for also being a genuine bunch of legends!

The brewing industry in Perth is incredible and the amount of knowledge and willingness to share your thoughts and wisdom to help someone is second to none. Probably the thing that excites us at SFB the most is now being able to join in and share our experiences to help others planning a start-up adventure. The Celebrations Superstore in Hamilton Hill, The Freo Doctor and The Old Bridge Cellars in North Fremantle have been a gold mine in terms of advice on the industry and how it works, not only providing a load of information but also taking a punt on us and stocking our SESSION IPA in various forms.

This Saturday as most people are aware is our Launch event at Percy Flint in South Fremantle. The guys down there have been incredibly accommodating with their venue for our launch and we look forward to a long time sitting around their bar having a beer in the future. They also had the honour of receiving South Fremantle Brewing’s first keg delivery, a milestone we are all incredibly pleased to have achieved.

The most important people to acknowledge for their help with the beginning of this adventure would have to be Mark and Trina at THREE RIVERS BREWING. To say they have been incredible is an understatement. From all the late-night emails, questions and advice they have provided to allowing us to store our beer, bottle our beer, help with establishing ties within the industry, providing guidance on licensing and the things we need to do that had been overlooked to brewing our first commercial release they have gone above and beyond. Not to mention the many samples of Three Rivers award winning beer they have allowed us to have along the way!

The feeling at South Fremantle Brewing is that without the help we have received we would not be in a position to be launching our SESSION IPA this Saturday, and can’t wait to share a beer with you all, before the real hard work starts!

See you all on Saturday!

We are very proud to announce that we will be launching South Fremantle Brewing with our SESSION IPA on Saturday the 8th October 2016 at Percy Flint in South Fremantle.

Who are South Fremantle Brewing?

In short, a group of mates having a crack at getting a brewery off the ground and letting you watch and taste along the way.

It probably sounds like the start of a terrible dad joke; what do you get when you take a Project Manager, a Chemical Process Engineer, a guy who fixes submarines (still no idea what that’s called), two Native Land Care Officers and a Clean Room Validation Specialist, all with a taste for good beer and a passion for making it?

I guess that’s a rhetorical question as the answer is in the heading, however that is the list of day jobs of Brewers Mark, Graham, Peter, Matt, Matt and Eamonn. Also known as South Fremantle Brewing.

In various forms and guises over the last few years we have all been homebrewers to some degree.

Since its first year, brewers Matt and Matt have been heavily involved in running the bar as a part of Camp Koasis’ efforts at securing its status as the number one party camp at the Blazing Swan Festival. Not only have the two boys served the beer but brewed every drop of it, including for some of the legendary all weekend fundraiser parties, and nearly every Fremantle house party recently.

Like we have said in the past, if you’ve partied in Fremantle, you’ve already drunk our beer!

As with most great stories a little home brew idea started off over a few beers in Fremantle one night. It went a little something like this; Hey let’s get 10 of us together in a collective, all chuck in some money and brew a batch of beer every weekend. If we have a weekend off for Christmas and to spend time with our partners and families that will give us 51 different new beers to drink in a year! Ok sounds like a plan was the general consensus.

As most people are fully aware, the majority of great plans formed in this fashion barely raise a mention the following day. Not in this case. Come Monday afternoon brewer Peter had fashioned a CAD drawn Process Flow Chart, a costing Spread sheet and created a Whatsapp group for the collective, henceforth known as the descriptively titled Sunset Castle Brewing Co.

Within 2 weeks the first 10 guys to commit to this idea all scrapped whatever brewing gear we had together and met one Friday night after work for our first collective brew. Word spread quickly around our other mates of a brewing “party” and from what should have been a nice afternoon brew turned into a boozy late nighter, (early morning) producing one of the worst pale ales we’ve ever tasted. Lesson one learned the hard way, pay attention to the brew!

From then on things have flown on a little more smoothly with a lot of learning, mistakes and beers made in between. Beers made for various parties and events, one of which was titled “Spa and Spit” party. A hired Spa in the front yard, whole lamb on the spit and four different beers on tap. This party came about a few weeks after things started to get a little more serious for what was to become South Fremantle Brewing and gave us the opportunity to run the idea past our friends. An overwhelming “yeh these beers are good” gave us the confidence to push on with this venture. 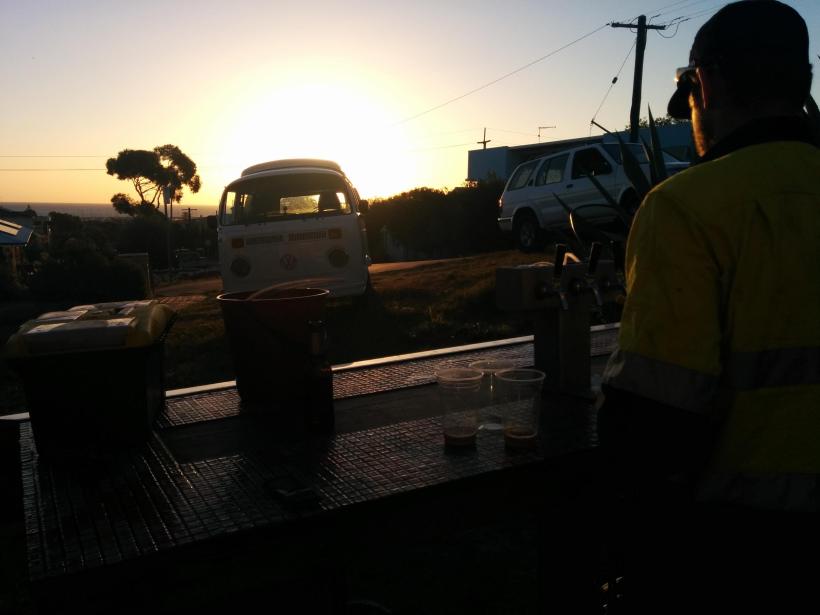 First brew day for our pilot batch release. Is this the beginning of a long and delicious journey? Hopefully! If not, it certainly smells good in the meantime!

To get the introductions out of the way firstly, we are South Fremantle Brewing and today we are (as we currently write this, hence the amazing smell) brewing our first batch of South Fremantle Brewing’s Session IPA. This beer is what we have decided to be our launch beer as it is the beer that spawned the idea of pursuing this crazy adventure.

From the beginning, we’re a bunch of Fremantle based home brewers coming together in an attempt to get more people to drink our beers. If anyone has ever partied in Fremantle, you have most definitely drunk our beer in the past. From humble beginnings brewing for parties in a back yard chook shed to enlisting the help of Mark and Trina at Three Rivers Brewing to push on with our pilot run. If anyone is asking their help has been nothing short of incredible! More about these legends in a later post.

The next few weeks look like they’re going to be fairly exciting as we gear up towards our launch party! Are we nervous? Yes! Are we exited? Incredibly!

Keep an eye out for launch dates, venues we’ll be on tap at and a few more details about who we are and how we have gotten here.